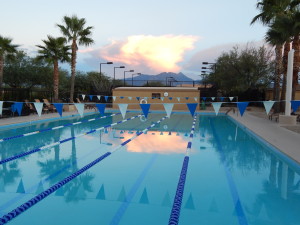 The lap pool is for adults only.

They say if you’re bored in Quail Creek, it’s your own darn fault.  With exercise classes from  Aqua Fit to Zumba Basics, and a full equipment room of treadmills, stationary bikes and  free weights, there are no excuses. Want something more leisurely? Learn Bocce Ball. It’s easy, it’s social, it’s fun. But if you’re used to more rigorous activity, start your day with 40 laps of swimming or a game of tennis. Then again, there’s always the three mile loop around the perimeter of Quail Creek to pump-up the heart and work up an appetite. So, if you’re bored, it’s your own darn fault!
Go to top
Anza Athletic Club

The newly remodeled and expanded Anza Athletic Club has an array of exercise machines, treadmills, bicycles and free weights along with exercise classrooms full of balls, bands and mats.  Start your day with sunrise Yoga or Dancercize your way to fitness.  No excuses with this beautiful club. The Anza Athletic Club is handicapped accessible. 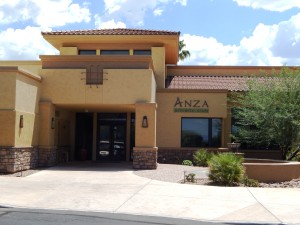 Anza has been remodeled and expanded. 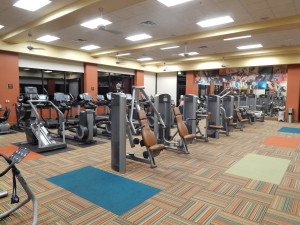 
Renters must carry their Renter Identification Card with them when using the Athletic Club which is open from 4am to 10pm seven days a week and closed from 10pm to 4am.  No key is needed to access the Athletic Club as the doors are handicap accessible and are unlocked during the day.  However, you will still need a pool key to access the pool after hours, through the gates. A pool key can be obtained from the Concierge at the Madera Club House. A Waiver and Release form must be signed in order to obtain the key. Renters will be required to make a deposit of $10 which will be refunded upon return of the keys 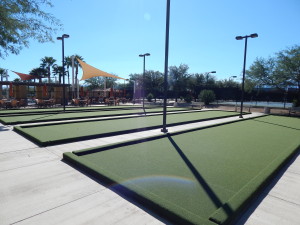 The Bocce courts were refurbished summer 2013.

You don’t need to be Italian to enjoy the ancient game of Bocce. You might need a bit of luck or a touch of talent, however, to win.

It’s a fun and easy way to spend an early outdoor evening with friends, especially since the courts received new felt, new benches and new score boards this summer. Bocce court hours are from sunrise to 10:00 p.m. daily. The courts are lighted for night play and players are asked to turn off lights when play is completed. Courts may be used on a first-come, first-served basis for club play unless reserved. Courts can be reserved by signing up on the bulletin board outside of the courts. Equipment is available at the courts in the storage bins provided at the courts.  Leather-soled shoes or golf shoes are not permitted.  Rolling and tossing of balls are the preferred method of playing the game. Balls should not be thrown beyond the halfway point between the foul line and the center of the court.  For additional rules, please see the Quail Creek Homeowners Rules and Regulations.

Go to top
Sixteen pickleball courts.
Pickleball or is it Pickle Ball?

I had never heard of pickle ball and I’m still not sure if it’s one word or two.  But it’s one of the newest crazes to hit Green Valley and the fastest growing sport in America.   As you drive into Quail Creek, look to your left to see the ramada and fenced and lighted courts.  Pickleball arrived. (It’s one word…I looked it up!)

Quail Creek has a swimming pool that allows children a couple of times a day, a hot tub, and an adults-only lap pool available for use by our residents and renters. There are also a lot of rules. Suffice to say, you may bring grandchildren (see the rules) but you may not wear cutoffs (see the rules). 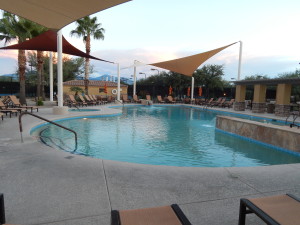 The family pool and hot tub. 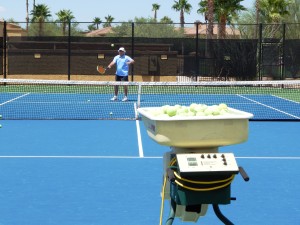 One of six tennis courts.

Wikipedia states that “Most historians believe that tennis originated in northern France in the 12th century, but the ball was then struck with the palm of the hand hence the name jeu de paume (“game of the palm”). It was not until the 16th century that rackets came into use, and the game began to be called “tennis”.  I don’t think Scott’s  Jack Kramer Autograph racket has been used since the 16th century, but it looks cool hanging in the garage.

Year round play is available on six lighted courts.  The Quail Creek Tennis Club(QCTC) manages the scheduling of tennis facilities on behalf of the community.